It was a mild November evening and I had tickets to see The Curious Incident of the Dog in the Night-Time with a friend. Since we are both early starters in the office we were both out of the building around three hours before the play started and were not exactly sure of what to do.

It was a bit early for dinner and I, having had a lot of cheese at the weekend, remembered that there is a good cheese shop near where we work… to quote her “you had me at cheese”. So off we went to the Neal’s Yard Dairy.

The smell just hits you as you enter the shop. As someone who has always liked cheese but only got into the many different varities in the last few years I was a bit mesmerized by all the cheeses that were suddenly in front of us. Then suddenly in front of us was a free sample of a blue cheese extended in our direction on the edge of a knife. Her name was Adrienne and I have her to thank for three more entries to this food list. 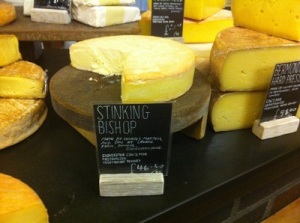 When we were looking around the shop I was discussing this food list with my friend (I am that obsessive) and three cheeses caught my eye as needing to be sampled for the blog (the shop also carried yarg, cheddar, caerphilly and stilton). We got talking to the lovely shop assistant and she was keen to help me cross the three off of my list. She also spoke of trying things like geoduck and smokey blue… foods I will have a wait a while for.

So, first there was the stinking bishop. I’d sampled this at a food show before so I knew that despite having a strong nose this cheese did not live up to the name (the name deriving from the cultivar of pear used to make the perry that washes the rind of the cheese). The cheese itself is rich with a slightly spicy edge to it, similar in a way to the Langres that I had recently. 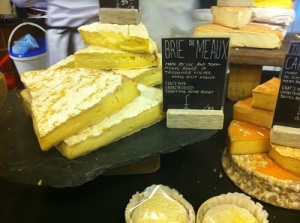 After this came Brie de Meaux. It is the only brie on the list and it comes from the town of Meaux in the region of Brie. The main thing I have to say about this cheese is that it frustrates me when I think of it now. Mainly because this was the best brie that I have ever tasted and now it is going to be hard to go back to ‘regular’ brie. It had been left out to ripen meaning it was creamy and strong like a good brie should be. Gorgeous.

This leaves me with the Cashel Blue, the cheese I ended up buying some of because of my general love of blue cheeses. The first thing of note is how it is not as salty as a lot f other blue cheeses I have tasted, yes it is still there but some can really over do it. Like all good blues there is a creaminess to it, but this one is REALLY creamy. I think it would actually be a good starter blue cheese since it really is rather mild, especially when you compare it to the likes of gorgonzola. I bought two quids worth and have managed to eat the entire wedge with a fork whilst I am writing about it. I wish I hadn’t have done that as now I have no cheese left.

After spending over half an hour sampling and talking about cheese we went to get some dinner at Rock and Sole Plaice. I’ve passed this so often on the way to and from work but we had a recommendation from someone else and we decided it would make for a good dinner before a show (having just collectively spent over £15 on cheese, she was good at her job).

Now, with this food list there are things that I am eating that I disagree with trying. Foie gras is one of these because of the methods used to make it. Skate is another because of the fact that we don’t know how much we have left before we wipe them out. This sucks because I really love skate. I mean, fine, it is a hassle to get all that deliciously delicate flaky fish meat off of the bones. Look at the portions too! Okay, it was £16 but this is a large plate of fish and chips in central London.

How was the play? I mean I went through all the food from that evening before the play even started. I think it says enough that it is something I have been thinking about for days since I saw it and I am trying to find another person to go with. Truly one of the best things I have ever seen on the stage.