Okay, so Link’s Awakening is not the most acclaimed of the two-dimensional The Legend of Zelda games but this was one of the first games that I ever completed when I owned the DX version on the Gameboy Colour. I even had a Gameboy Printer and used it to print out some of the screenshots.

Now that I have dated myself since I completed the DX version in my final years of primary I am going to be honest that I do not remember too much about playing it apart from a section in a dungeon level where you needed to shoot a statue in the eye with an arrow… this was something that continually perplexed me for a while until a friend at school (who had already completed it) helped me out.

I have yet to play A Link to the Past. I know this is meant to be the jewel in the crown of the two-dimensional The Legend of Zelda series… so it’s bad that I haven’t played it… but I will get there soon. 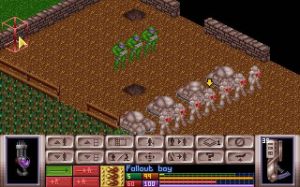 Holy moly, that was a hard game. It is yet another example of how video games back in the day. The idea of this game is a really intriguing one; build a base to monitor alien invaders, capture their technology and generally save the Earth. Needless to say we never go around to the saving the Earth part since neither of us were able to get too far before we lost all our resources and had to resign… good thing neither of us are in charge of such an organisation. Yikes.