Today’s post is an example of a happy food accident. I am semi-regularly going to my favourite store in Chinatown and gradually sampling all of the more unusual (meaning not usually available in my local Morrison’s) fruit and vegetables.

Whilst I was there I saw large a cheap packs of rambutan and mangosteen which annoyed me seeing how I paid for them when I went to Borough Market (lesson learnt). I actually went there to get green mango… and it looks like that’s going to be a bit of a non-starter now.

Instead I purchased the focus of today’s post. Maybe next time I’ll have the cash to buy the £40 pack of bird’s nest they keep behind the counter.

Pomelo is the largest citrus fruit out there meaning that it more than earns its Latin name of Citrus maxima. It is also, interestingly (at least to me), one of the rarer examples of a citrus fruit that is a species in its own right and not a hybrid. It’s one of those things I randomly picked up after an evening perusing Wikipedia (and if it’s on the internet it must be true) but pomelo is one of the originators of many of the citrus fruits we know and love including grapefruit, lemons and sweet oranges.

According to the book it is more normal to have a pomelo be white-pale green on the inside with pink being a rarer colour, so I consider this to be a lucky pomelo. The weird thing about eating it is how much like grape fruit it tastes like but with little-to-no of the bitterness. It was really like a cross between a mandarin and a grapefruit.

So after using my tongue and teeth to eat the segments I had a whole lot of peel left and for some reason got it into my head that I should try to make candied peel… and then I saw it was a list item. 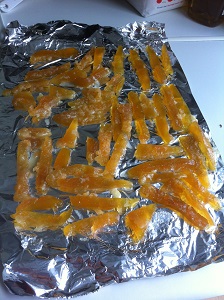 After boiling the peel of the pomelo in fresh boiling water three times and then reducing it down in equal parts peel, water and sugar I was left with the above. The peel had gone from a green-yellow to orange and become sticky and translucent. Most of the bitterness was gone and it was now very sweet.

All of this happened the weekend before a friend of mine celebrated her birthday so I thought what better than to turn this peel into something nice (since I also know she likes grapefruit). So I’ve baked them into dark chocolate and candied pomelo cookies. 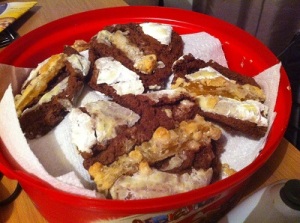