It didn’t take too long but I have managed to get to 100 foods from the list in a matter of months. Thing is, already I have begun to notice that this is getting harder and so we’ll see just how long it takes to make it to the next landmark.

Whilst the meat section technically got the landmark I was so proud for how my fish dish came out that I figured I would just combine the two of these into one.

I’m getting to the end of the fish that I am able to get easily, and the book describes this as a fish highly-prized throughout Europe. I can’t disagree with this too much since it was part of Asda’s Extra Special range. Considering this, I found a recipe so it would be extra fancy.

The Good Food recipe I found paired the sea bass with anchovies, capers, lemon and broccoli. I never thought I would say that I like broccoli but now I know how to cook it it’s becoming part of the regular rotation. On the right there are parsnips and polenta cubes that I roasted in Korean chilli paste.  The whole thing took about an hour and a half to prepare but it was worth it. The sea bass was moist, flaky with a crisp skin having been fried in my trusty wok. Definitely a recipe worth repeating.

So, here we are reaching 100 food items with a recipe that could have counted for six if the other five hadn’t been done already. I did a little bit of research into serrano ham and found that it is apparently on a list of four quality Spanish hams… and it occupies the lowest ranking on the list. Salty and sweet it was delicious just out of the pack. In a sandwich though the ham took on a better supporting role. 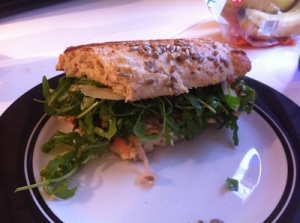 So, a hot sandwich with Serrano ham, manchego cheese and apple is where I chomped on item 100 of this list. Something delicious, and a lot better than the samphire I can tell you.