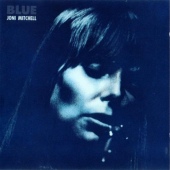 This week’s album is the second highest ranked album by a woman. I am in danger of using up all the albums with female singers before I reach 100 listened to if I continue to liberally pepper my blog with these albums but… I prefer to listen to women over men. In fact in the last week of my casual listening I’ve had an anomaly with scandi-pop group Donkeyboy receiving a large number of listens (as well as some residual R.E.M.). Still, the point stands.

Blue is one of those albums that I have always really liked but rarely have a time where I feel it suits my listening patterns. If I could drive it would make for the perfect road album (and not just because of the scene in Practical Magic where Nicole Kidman sings along to ‘A Case of You’ in a key that is… not of the song). I have Cat Power’s cover of ‘Blue’ to thank for me giving this album a go back in 2008.

What makes Blue an exceptional album is just how raw it is. Being just Joni and her guitar or piano it is very intimate and feels very much like a confessional. ‘River’ starts off with a tune that resembles ‘Jingle Bells’ and transforms into a song about someone having broken up near Christmas time and wishing to get away from the past. ‘A Case Of You’ tells a story of being so in love with someone that you just want to drink it all up until you explode. ‘Little Green’ is a nice enough song until you find out it is about the daughter she gave up for adoption, then the song becomes heartbreaking.

In many ways Blue is an album that is exactly that; blue. In other ways it is the album that helped to define to many future artists what a singer-songwriter album should be. Brutal, lyrically complex and, above all, honest. It isn’t all down in the dumps. In many ways it’s an album of rebirth and picking yourself up again. The break-up of a major relationship hurts like hell but, as demonstrated in ‘Carey’, there is always the other end of the tunnel.

At just over 35 minutes this album is compact and, in the words of my partner, verbose. A strum of the guitar is not wasted and it makes for a near-impossible act for any artist to follow. The fact that she seems to have almost equalled this in terms of kudos two albums later is nothing less than extraordinary.