Thanks to having a lot of friends who, like myself, are really into movies which means I have access to a large number of film recommendations from more obscure nations. Whilst countries like Russia, China and India have an extremely large number of films I want to get to them later with something I really want to see (I also have to work out how I am going to reconcile the whole Mainland China, Hong Kong and Taiwan thing). 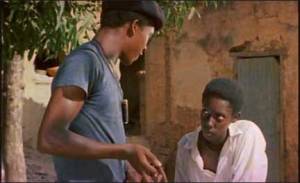 So, Mali ended up being the next pick and not just because it geographically links Burkina Faso and Algeria, although that is a nice by-product. I have been meaning for years to try and watch more African cinema and this is only the sixth film I have seen from the continent as a whole. As part of this whole ‘view films from 100 different countries’ I hope to rectify this and maybe get to 10 countries.

Anyway for now I am at Mali with a winner of the Étalon de Yennenga at the biannual FESPACO awards in 1983. The interesting thing about this particular award is how its retinue is not necessarily the best film at the festival but the one that best shows “Africa’s realities”. Something which, let’s be frank here, can be depressing when we talk about any nation or continent.

The story of Finye is one of those that occurs in any culture. Two protagonists who are the children of different sections of society (he, the son of a traditional chieftain and she, the daughter of a ruling member of the military) and both sides come to blows. The way this happens in the film is more unusual since rather than this being a clash between two opposing families/sections of society this depicts a more generational dispute.

Bah and Batrou are students at the local university and, after a flagrant display of corruption occurs regarding the exam results, they become part of a student resistance movement (through leaflets and protest) which results in some rather big push back from the military. The fact that this film won on the merit of depicting Africa’s realities does depress me somewhat, but then again so has watching the news recently so I’m kinda used to the feeling.

In terms of film making the main issue I had with it is that despite the good story and the hyper-realistic setting interwoven with fantastical sequences (which reminded me a bit of Beasts of the Southern Wild) was the acting. This is something that usually puts me off from watching movies from countries without established film industries since it does mean that there will be issues regarding the availability of acting talent (then again films like The Class are populated with non-professional actors and still get by really well).

Thing is, to make a film that depicts these sorts of realities you really need a director or writer who knows how bad things really are and Souleymane Cissé is competant enough to do this with the required emotional blow.